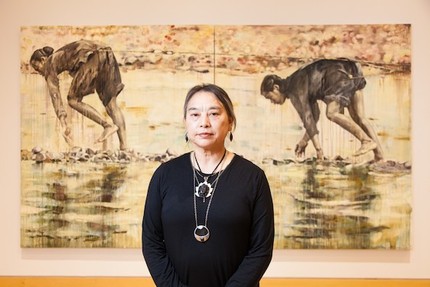 Hung Liu, the pathbreaking Chinese-born American painter who foregrounded the working class, immigrants, and women in haunting, incandescent portraits that mingle Chinese and Western traditions, died August 7 at the age of seventy-three. One of the first Chinese artists to establish a career in the United States, Liu explored the delicate relationship between memory and history in paintings focusing on communities misrepresented or marginalized in official narratives. Her style, typically featuring multilayered brushstrokes and washes of linseed oil, has been characterized by her husband, critic Jack Kelley, as a kind of “weeping realism.”

Liu was born in Changchun, China, in 1948, just months before the founding of the People’s Republic of China. Shortly after her birth, her father, a member of the Kuomintang, was jailed as a vocal opponent of Communism; Liu’s childhood visits to the labor camp at which he was interred would shape her life and work. In 1958, Liu moved with an aunt to Beijing, where she studied at what is now the Experimental High School Attached to Beijing University, before being compelled to relocate to rural Huairou as part of the forced “reeducation” program mandated by the Cultural Revolution begun in 1966. While living there, Liu secretly photographed the farmers and villagers she encountered, along with their families, though this was forbidden by the Maoist regime. The resulting photos would prove foundational, as she put them in the service of the socialist realism taught in the Chinese art schools of the time to create portraits whose emotional resonance would be a hallmark of her work. Her series of this era, “My Secret Freedom,” is a group of tiny canvases depicting scenes of everyday life in Huairou, which Liu created by hiding a small paintbrush and miniature paint set in her coat, creating her portraits hurriedly and furtively so as to escape authoritarian notice.

In the early 1970s, Liu moved to Beijing, where she spent a decade studying at the Beijing Teachers College and at the Academy of Fine Arts and teaching drawing and painting to children on television while working tirelessly to obtain her visa. In 1984, with just twenty dollars in her pocket, she arrived in the US to study at the University of California, San Diego, from which she graduated in 1986. In 1988, while a resident artist at San Francisco’s Capp Street Project, she painted Resident Alien, a self-portrait showing her green card, on which she replaced her date of birth with that of her move to the US, and her name with the words “Cookie, Fortune.” The work established her as a force in the art world and has since been contextualized by scholars within a range of fields, including gender studies, women’s studies, and art history.

Liu continued to blend Western and Chinese styles in work that pushed against the portrayals of Chinese immigrants, especially women, typical in either culture. Writing on an exhibition of her work in 1990 in the pages of Artforum, John Yau noted, “What was evident in all of them was the artist’s attempt to transform memory and rage (for Liu, they go hand in hand) into a visual statement that is neither naive nor sentimental. Rather than revealing overtly personal memories, which could make her appear to be a helpless and isolated victim, Liu depicts the various historical and social forces which have implicated her for being both Chinese and a woman, and explores how these forces affected her life in China  . . . and in America.”

Among the works for which Liu is best known are Jiu Jin Shan (Old Gold Mountain), 1994, a heap of 200,000 fortune cookies atop intersecting railroad tracks; and Going Away, Coming Home, 2006, a massive installation at the Oakland, California, airport depicting a flock of graceful cranes. Her work has been exhibited widely, including in the traveling retrospective “Summoning Ghosts” (2013), which amassed works from forty collections, and she was the recipient of numerous awards, among them two NEA fellowships, the San Francisco Museum of Modern Art’s SECA Award, and a Eureka fellowship.

Her work is held in the collections of museums including SF MoMA; the Whitney Museum of American Art and the Metropolitan Museum of Art, both in New York; the National Gallery of Art in Washington, DC; and the Los Angeles County Museum of Art. Additionally, Liu was widely known as a mentor, having in 1990 taken a job as professor of painting at Mills College, where she remained for several decades before retiring as professor emerita in 2014.

Liu’s work is currently the subject of an exhibition at San Francisco’s De Young Museum, where it is on view through March 13, 2022. A retrospective of her work titled “Portraits of Promised Lands” is to open later this year at the National Portrait Gallery in Washington, DC. Only two years prior, an exhibition of her work had been canceled by Beijing censors in what many perceived as a sign of China’s growing encroachment on artistic expression.

“I learned that history is a verb,” Liu said in an interview for the National Endowment for the Arts in 2012, “and when you have new discoveries in terms of evidence, materials, and witnesses, new kind of recall, or maybe a regime change, history can be rewritten.”