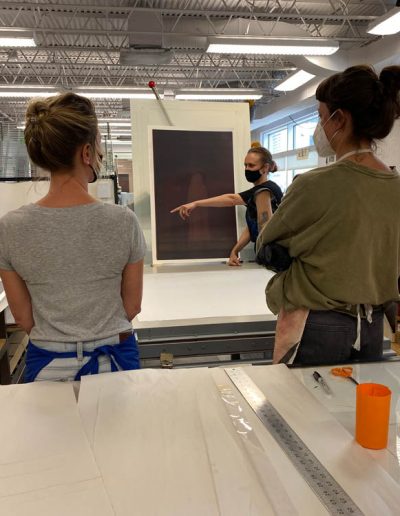 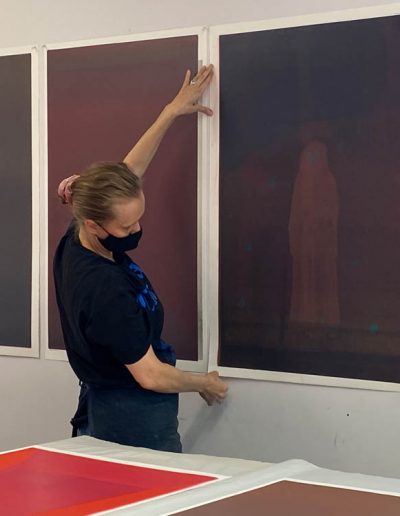 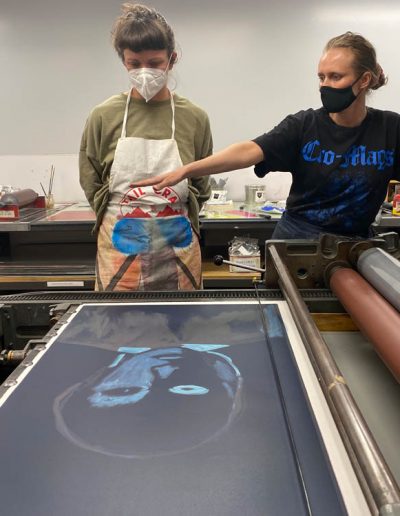 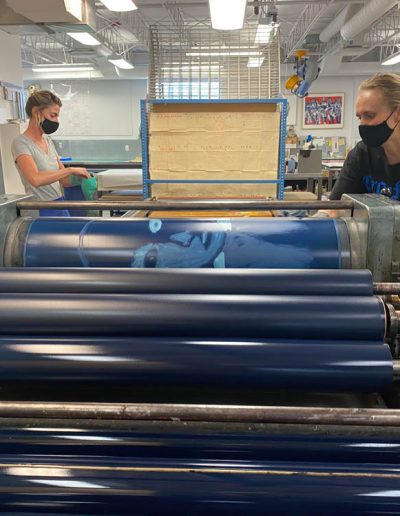 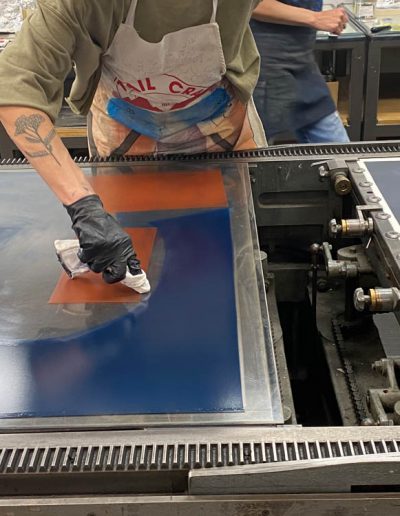 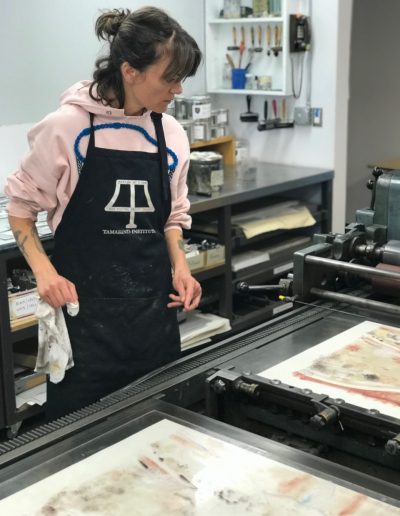 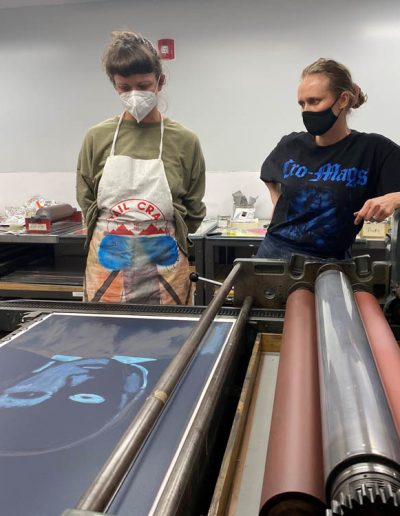 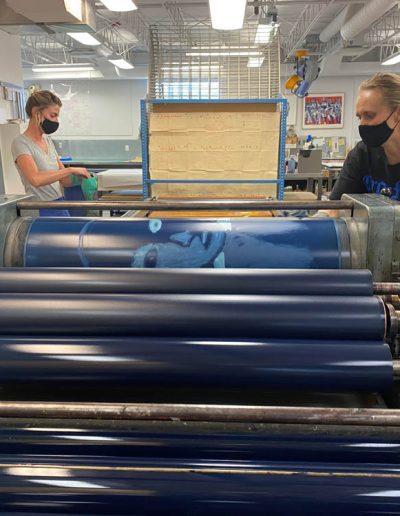 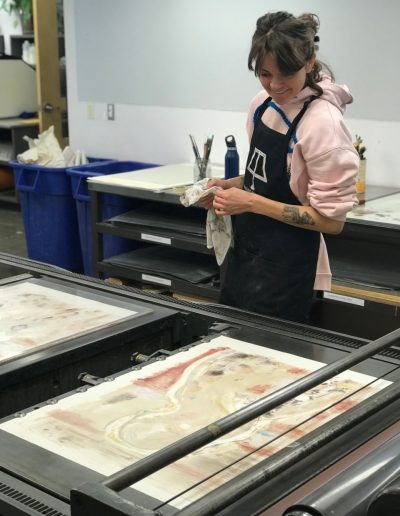 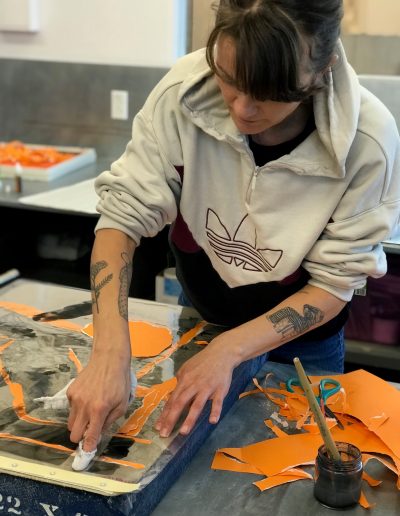 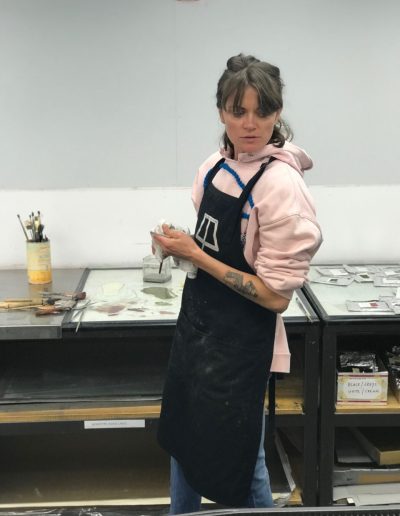 Through the process of painting and mark-making Maja Ruznic comes to discover the meaning of her subject matter. An artist who moves easily between varied materials, scale, and surfaces, Ruznic’s practice of drawing and painting gives shape to ethereal, fluid figures that in turn inspire a deeper understanding of the unconscious mind and the ­weight of history. Ruznic explains that she paints with “the drunken hand,” describing her method of conjuring a memory through an intuitive impulse that knows something she may not. Born in Bosnia and Hercegovina in 1983, Ruznic was a refugee of the Bosnian War. She immigrated to the United States with her family at the age of nine, settling on the West Coast. Ruznic eventually went on to study at the University of California, Berkeley, later receiving an MFA from the California College of Arts. She currently lives and works in New Mexico.

Her first residency with Tamarind Institute in 2019 produced a lithographic edition and a series of unique proofs pulled in a variation of inks. On the last few days of the residency the printers encouraged her to experiment with monotyping. The physicality of the process, its element of chance, and the idea of pulling an image from an ephemeral, unstable matrix is perfectly aligned with this artist’s manner of working and her penchant for discovery through the materiality of the work. The experience of observing the swift operation of the massive offset Dufa press in the workshop, pulling painterly prints and ghost impressions from the original, all had a transformative effect on the artist’s studio practice. She subsequently expanded on the ideas of layering color and pulling away through the layers in her painting practice. The jewel tones created through deep ink blends also found their way into the rich palettes of the paintings that followed.

The pandemic interrupted plans for Ruznic to return to the workshop until the Spring 2021. This most recent residency found the artist in a different place in her work and family life, and a new creative team of collaborating printers in the workshop. During an intensive one-week collaboration with a team of printers led by Tamarind Master Printer Valpuri Remling, Ruznic produced a body of work that finds a new physicality for the monotype process and an evocative, unearthly presence in densely layered surfaces and shimmering forms. Unique passes of ink on paper, giving each one the singularity and fragility of a daguerreotype portrait, full of memory and transformation. Her amorphous figures inspire empathy and the sense of an elusive history uncovered.

Ruznic explains her new body of work from Tamarind as follows:

“Like my paintings, the prints in this group are composed of many layers—somewhere between seven to ten. The layering allowed us to create a kind of depth that was not illusionistic, but rather, psychological.  We weren’t concerned with the abstraction/figuration dichotomy, and instead focused on discovering innovative techniques and color relationships. One of our favorite techniques was to take one, very heavily coated print and place it face to face with a blank paper. The residue or trace of the fully saturated print would be the start of a new print. In that sense, the same marks are embedded in almost every piece but the layering differentiated them all in the end.

I think of all the prints as interior or psychological landscapes. Carl Jung, whose work fascinates me a great deal, talks about the importance of integrating our Shadow, or repressed self with our conscious self. These prints are perhaps my surrender to Shadow and my hope is that they will invite a similar kind of acceptance in the viewer.”

When asked about the collaboration at Tamarind, Ruznic said, “[Tamarind Master Printer] Valpuri Remling, who I had worked with previously and had established a great work dynamic with, was vital to our project. She understood the mood that I was going for and we quickly became a two headed print machine. It was intoxicating to work with her.”

NEW RELEASES BY MAJA RUZNIC TO BE ANNOUNCED FRIDAY, FEBRUARY 4, 2022.