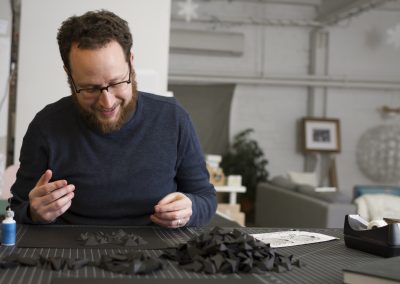 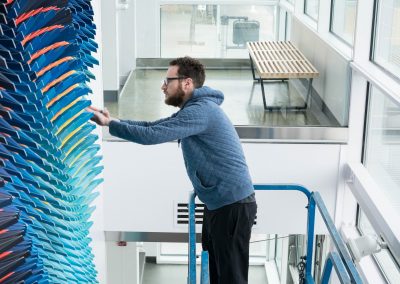 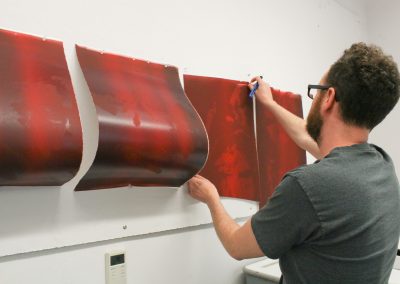 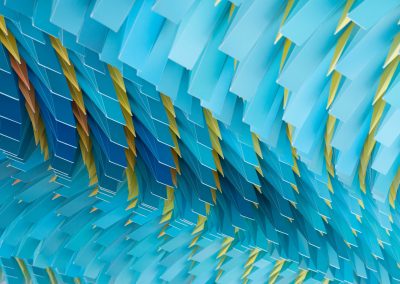 Paper engineer Matthew Shlian works in the realm between art and science, guided by wonder and rooted in print media, book arts, and commercial design. His sculptural forms are inspired by organic material and iterative patterns, each piece mapped out digitally, and then folded and assembled by hand. His kinetic work as an artist has led to collaborations with scientists at the University of Michigan, where his paper folding abilities helped researchers to visualize their work on the nanoscale, translating paper structures to micro folds. His complex paper folds have contributed to investigations such as visualizing cellular division and solar cell development.

During his Tamarind residency in 2016, Shlian worked with Tamarind printers to create a series of prints which he later cut up, folded, and reconstructed into dimensional pieces. This series, The Other Ishihara Test, was inspired by the color palette of a seventeenth century Dutch still life painting by Rachel Ruysch. The resulting works–Sherbert, Hell, Winter, Marble, and Murmur utilize the same geometric pattern, yet each piece incorporates the printed sheets in a unique combination. The Other Ishihara Test, as Shlian explains, “references the color blindness test by the same name. I am color blind and it is this deficiency in perception that allows a certain focus on pattern, form, and repetition.”

Shlian was the first artist awarded the Frederick Hammersley Artist Residency for 2017-2018. He holds an MFA in Print Media and Paper Engineering from Cranbrook Academy (2006) and a BFA in Printmaking and Sculpture from Alfred University (2002). He has participated in solo and group exhibitions throughout the world and has been involved in projects with Apple, Grafik Magazine, Herman Miller, LEVI’s, Sesame Street, Detroit Institute of Art, and many more.

Book: UNFOLDING The Paper Art and Science of Matthew Shlian

The Frederick Hammersley Artist Residency, established in 2017, creates an opportunity for an artist to consider Hammersley’s legacy as a painter and printmaker, as well as his influence as a conceptual thinker.

Learn more about past residencies

Thursday, May 27, 2021 Shlian opened up his studio for a virtual visit FOR COLLECTORS CLUB MEMBERS ONLY. This is the first in Tamarind's summer virtual studio visits. All the details on Collectors Club are online at https://tamarind.unm.edu/2021club/....

Unfolding: The Paper Art and Science of Matthew Shlian

This new publication from Thames and Hudson includes essays by Matthew Shlian, Eric Broug, Stuart Kestenbaum, Lawrence Weschler and Diana Gaston. In this complete retrospective of the paper engineer and artist Matthew Shlian, readers will find a decade of unrivalled...