Louise Nevelson was an American sculptor known for her monumental, wooden wall pieces and outdoor sculptures constructed from found objects. She first collaborated with Tamarind in 1963, when the workshop was based in Los Angeles on Tamarind Ave. The publishing structure was different in those early years, and artists were invited for two month residencies, to experiment with lithography and make as many editions as they could manage. Nevelson worked with a team of 5 printers over a period of 6 weeks to produce 26 editions. At the end of the collaboration, the editions were shipped to the artist in New York. For several decades, these prints remained in flat files.

The prints produced during this period in the workshop were not titled, unlike most of her sculptures and earlier prints. She used various drawing and image making materials, such as cheesecloth and lace, to create her drawings on stone. For the most part she worked in black, with occasional use of a deep indigo blue and a brick-red ink. She used the white of the paper to complete the forms in opposition to the deep opaque inks that were available at that time. The imagery of the 1963 lithographs suggest the boxes and recessed forms of her monumental sculptural walls, bringing the three dimensional forms to a two dimensional medium. Working with printers John Dowell, Irwin Hollander, Aris Koutroulis Jason Leese, and Ken Tyler, Nevelson produced an ambitious series of lithographs that explore the optical possibilities and sensations of the printed surface.

Nevelson exhibited internationally and her work is represented in museum collections around the world, including The Art Institute of Chicago, The Brooklyn Museum, The Cleveland Museum of Art, The Corcoran Gallery of Art, Fine Arts Museums of San Francisco, Hirshhorn Museum and Sculpture Garden, Los Angeles County Museum of Art, The Metropolitan Museum of Art, and Centre Georges Pompidou in Paris. 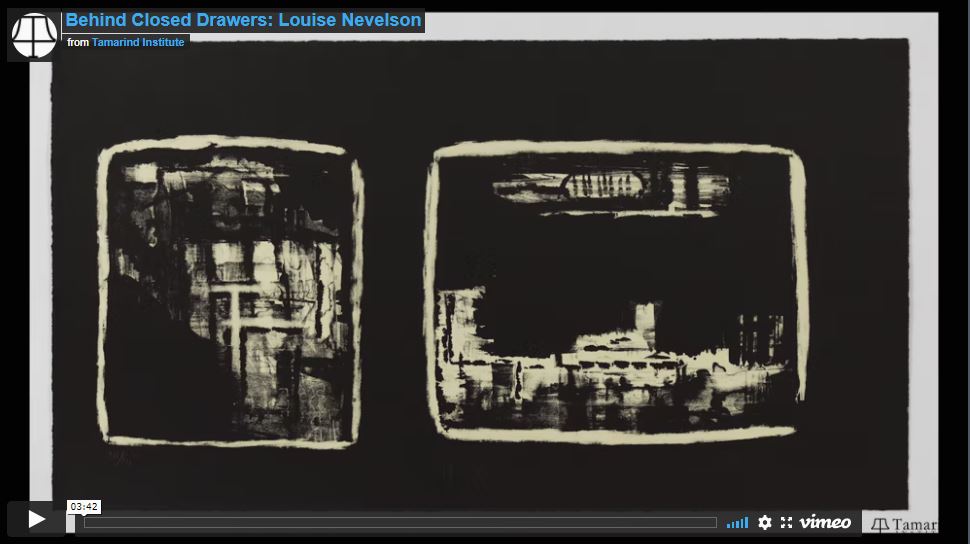