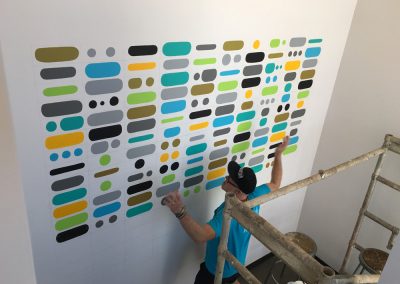 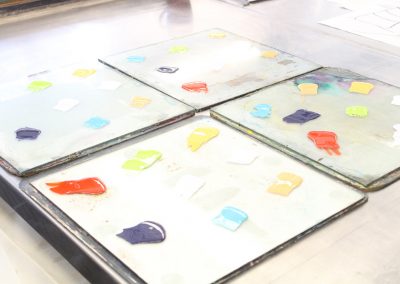 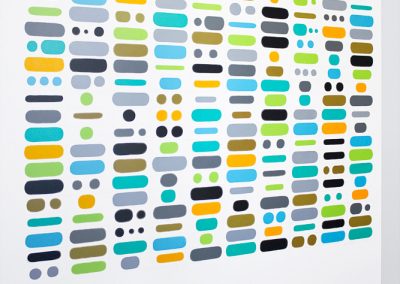 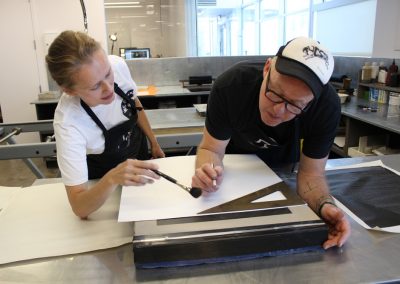 Artist Matt Magee has completed two residencies at Tamarind Institute. In February 2013, he produced seven editions related to language. Magee explains that, “a grapheme is the smallest semantically distinguishing unit in written language, including alphabetic letters, typographic ligatures, Chinese characters, numerical digits, punctuation marks and other individual systems of any of the world’s writing systems”. In another lithograph, titled “After Math,” Magee created a powerfully optical, red and white, double-paneled print recalling the spirit of Frank Stella and Op art. The final series of three lithographs, “Verbatim,” “Carthew” and “Decoder” mirror the painting style for which Magee is well-known.

In 2016, Magee began a series of lithographs: two released in May of 2016; and four to be released in the fall. This recent work continues his exploration of language and the impact of graphic symbols in communication and memory.

Magee’s prints have recently been collected by the Houston Museum of Art, and he has exhibited with James Kelly in Santa Fe, Hiram Butler in Houston, and Knoedler and Company in New York, among a multitude of other international venues.