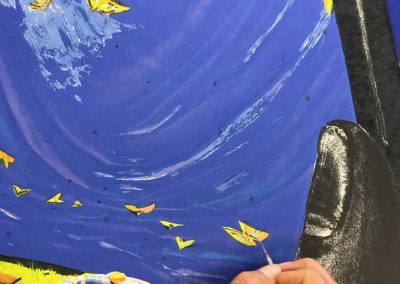 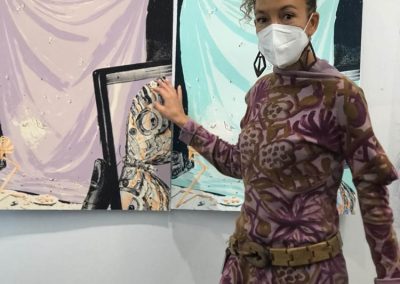 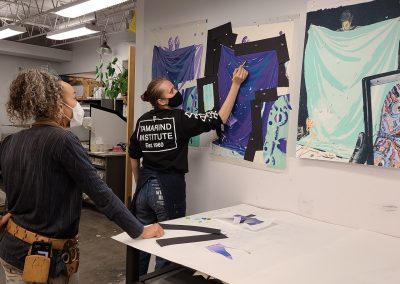 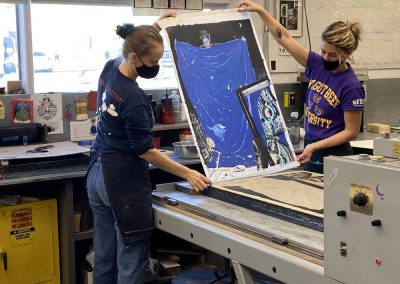 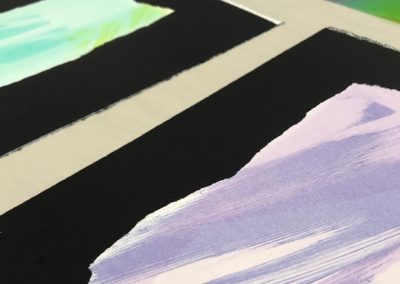 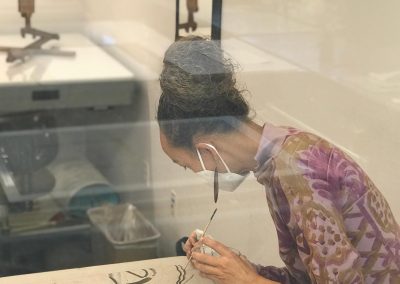 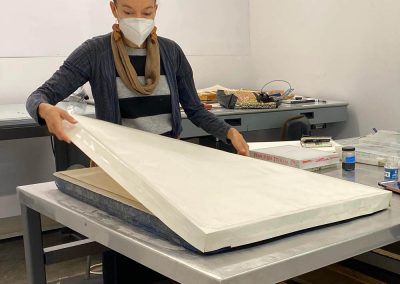 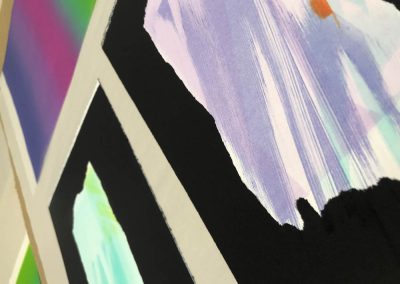 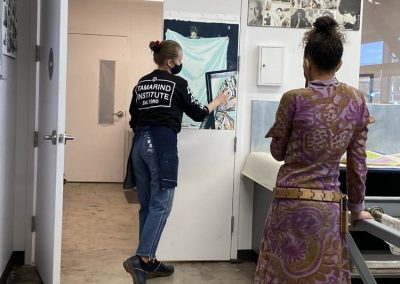 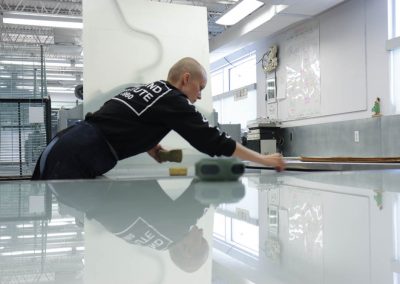 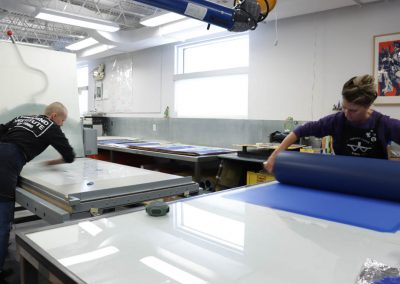 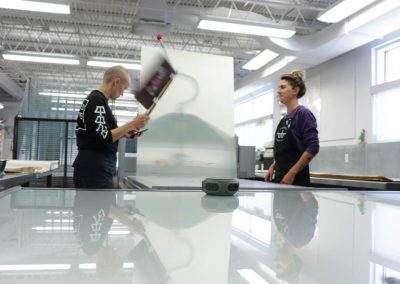 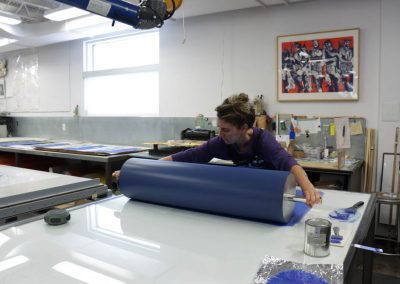 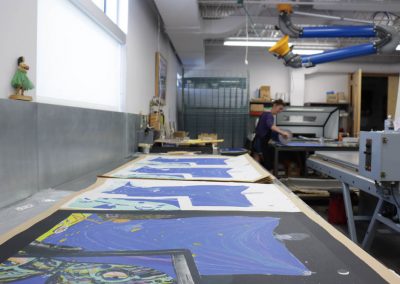 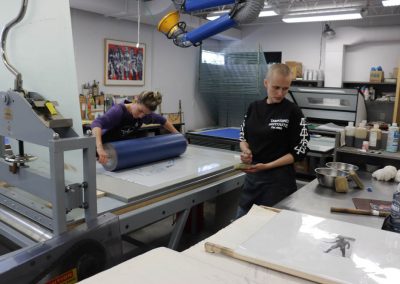 Interdisciplinary artist Paula Wilson challenges the fabled narrative of the western landscape from a new perspective. Her imagery weaves together ideas from the viewpoint of a naturalist, educator, ecosexual, and contemporary artist of color. 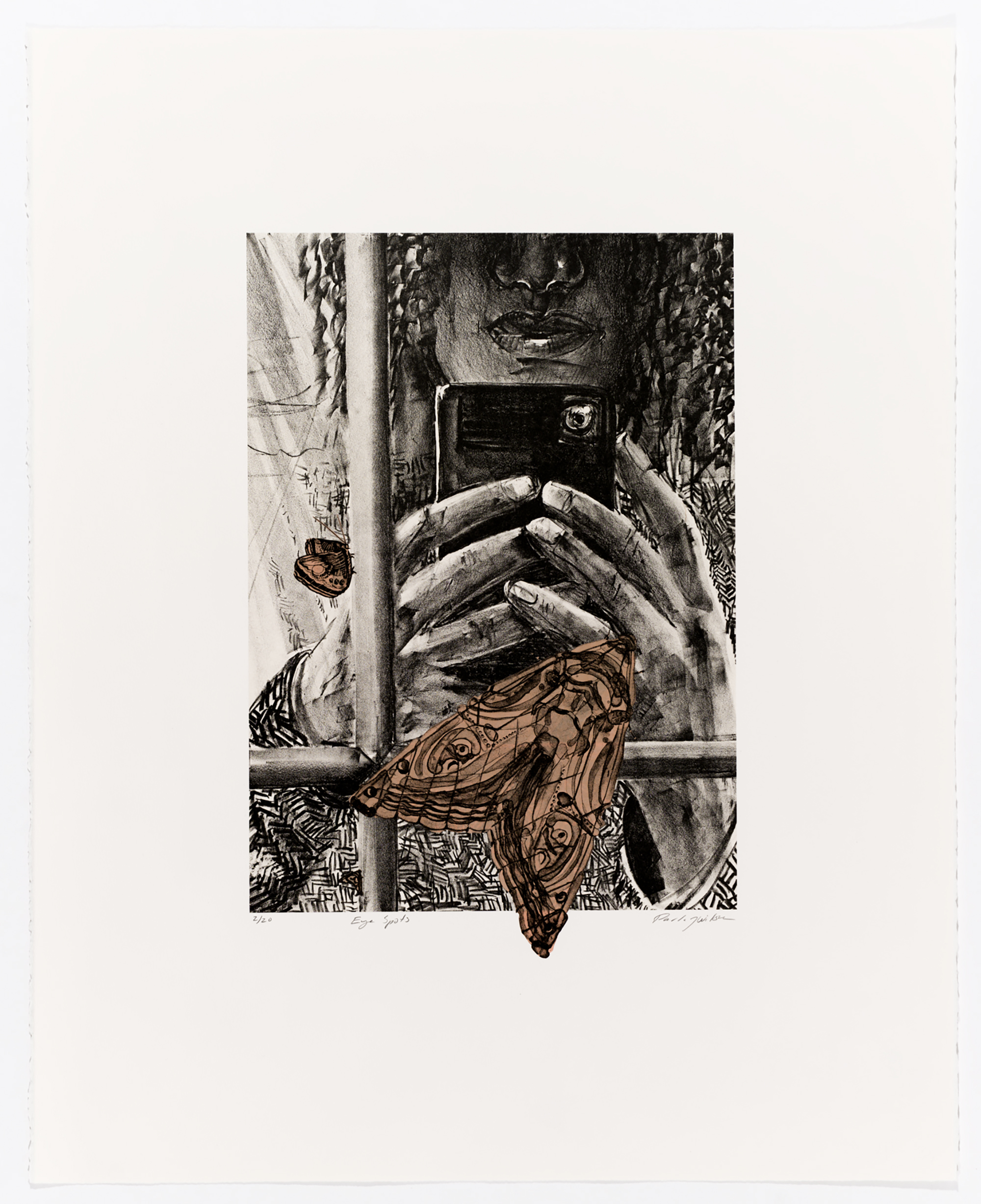 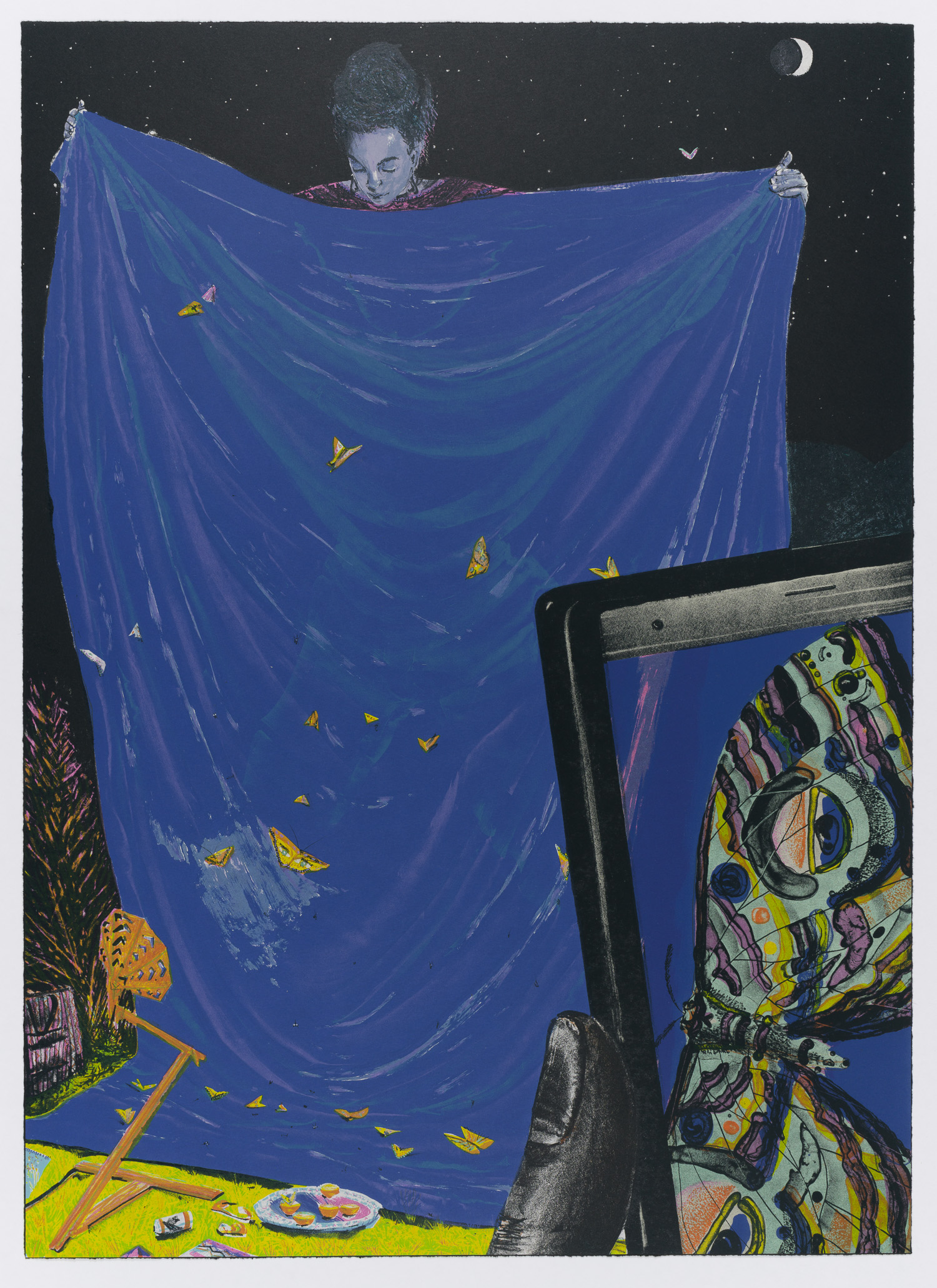 Her 2021 residency at Tamarind produced a body of work that explores ideas of light, attraction, and the act of observing. At the center of this series of new lithographs is the Yucca Moth, the sole pollinator of the flowering Yucca plant, which together thrive in the dry climate of the desert southwest. Wilson constructs her narrative around the behavior and symbolism of the moth, playing with ideas of transformation, camouflage, and mutual attraction. In Catching the Light, Wilson sets up an imagined night performance of sorts, with a central figure based on her own likeness standing in the brilliant glow of a black light and holding a large sheet to catch the light and attract the moths. The illuminated scene imagines a dance between the light, the hovering moths, and the interaction of the female figure and the anonymous observer who is represented by a cell phone. The inclusion of the cell phone screen at lower right introduces another light source, while capturing the vibrant pattern of the moth’s wings and extending the narrative off the frame of the printed image. The moth and the cell phone are central players in the edition Eye Spots, too, with a cropped female figure holding a cell phone up to the window to capture a moth that has landed on the pane as a hand-printed collaged paper object. In this rich play of observer and observed, camera eye and winged eye spots, Wilson creates a sense of longing for a connection to the natural world. Her Lepidoptera Collection, a series of five individually presented moths each detailed with its own imagined wing pattern, brings the formal study of insects and preservation of specimens into the dialogue. As in much of her work that considers the act of looking, these prints circle around how we see and how we respond to the natural world.

Wilson is an experienced printmaker who works in all forms of print, ranging from formal editions to unique printed textiles and installation. She received her BFA from Washington University in St Louis and her MFA from Columbia University in New York. Her work is in the collections of Yale University Art Gallery, Rubell Collection, Bowdoin College Museum of Art, The Fabric Workshop and Museum, The Studio Museum in Harlem, and the Albuquerque Museum. She has held artist residencies and lectured all over the world, and recently received the prestigious Hodder Fellowship from Princeton University’s Lewis Center for the Arts. Wilson lives and works in Carrizozo, New Mexico where she is co-founder of the Carrizozo Artist in Residency (AIR).

In November 2020, Wilson presented an artist talk, co-sponsored by UNM’s African American Student Services and Tamarind Institute. A recording of the talk is available under Tamarind Talks on Vimeo.

Lesperance, Simpson and Wilson at Art on Paper 2021

Paula Wilson's Residency, January 2021 On Monday we announced the beginning of a long awaited residency with Paula Wilson. Starting out, Paula is drawing, looking at earlier Tamarind prints, and soaking in the collaborative spirit of the workshop. Here she is pulling...

Tamarind Institute is a partner with Art Money. 10 payments. 10 months. No interest.