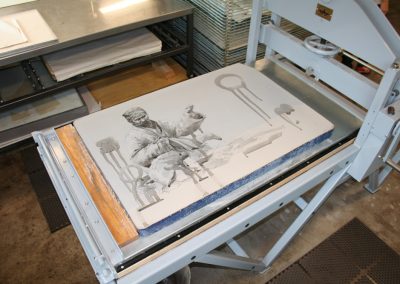 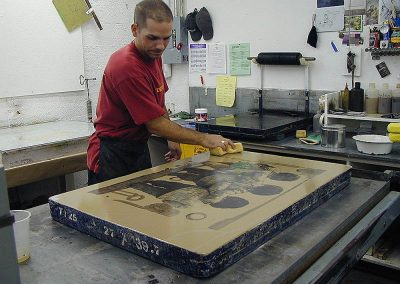 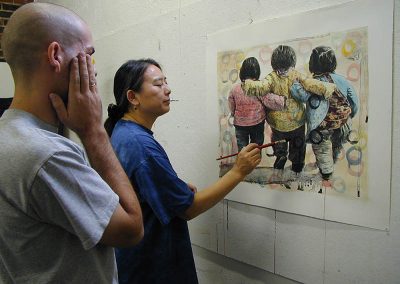 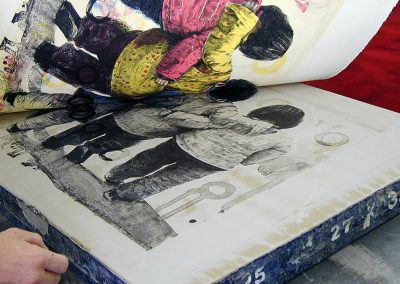 “Because I am looking for the mythic pose beneath the human figure, I derive my subjects from historical photographs taken in China, and of Chinese people…” says Hung Liu. “This interweaving of images from the ancient and modern past continues my interest in a contemporary form of history painting in which the subjects from one era witness and comment upon those of another, keeping the idea of history open and fluid.”

Initially trained in the Socialist Realist style, Liu studied mural painting as a graduate student at the Central Academy of Fine Art in Beijing, before immigrating to the US in 1984 to attend the University of California, San Diego. Her style has been described as “weeping realism,” combining the erosion of memory, the passage of time, and historical implications of the present.

A two-time recipient of a National Endowment for the Arts Fellowship in painting, Liu also received a Lifetime Achievement Award in Printmaking from the Southern Graphics Council International in 2011. Liu’s works have been exhibited extensively and collected by the Oakland Museum of California; San Francisco Museum of Modern Art; the Whitney Museum of American Art, New York; Metropolitan Museum of Art, New York; National Gallery of Art, Washington, D.C.; Asian Art Museum of San Francisco; and the Los Angeles County Museum of Art, among others. Liu was named Professor Emerita at Mills College, where she began teaching in 1990.